For this ATSC 3.0 technical overview, we will follow the OSI model (Open Systems Interconnection) in order to structure the different protocols and signals involved in building an ATSC 3.0 signal from the ground up from the transmission point of view: 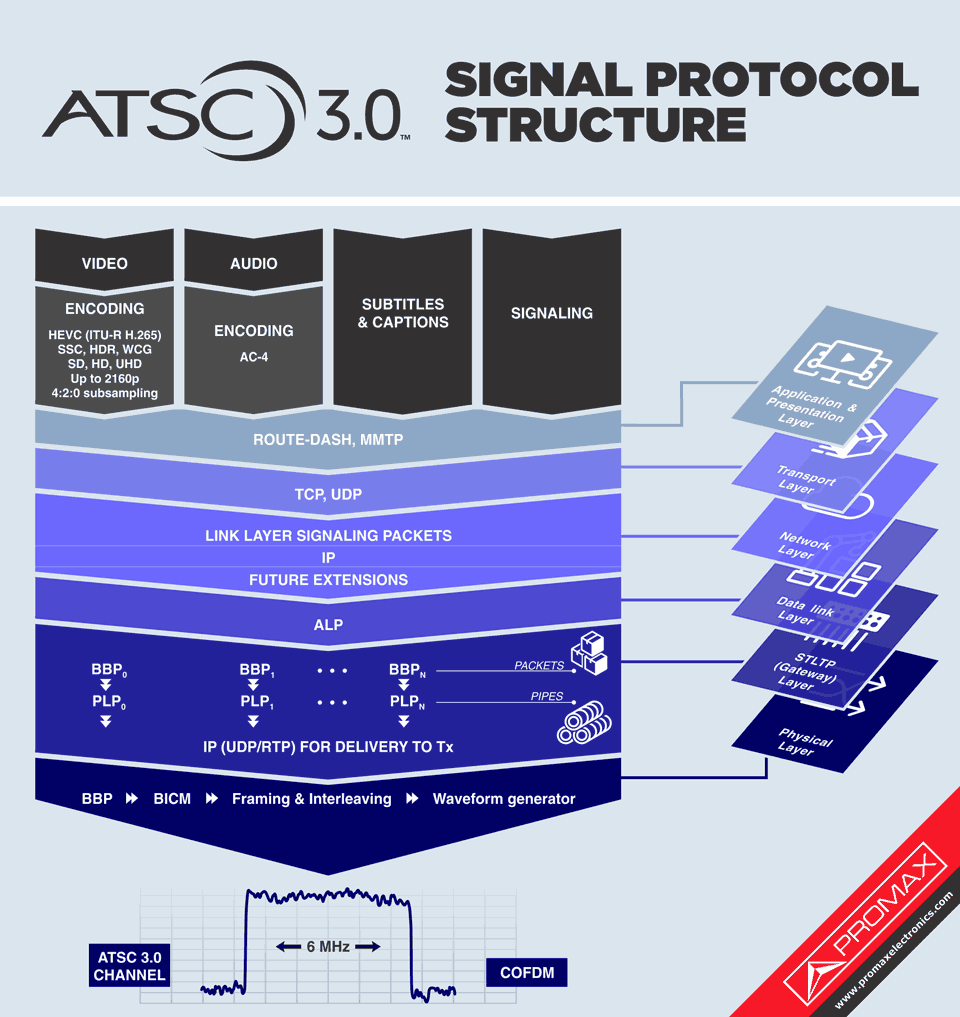 ATSC 3.0 signal protocol structure according to the OSI model (click to enlarge)

ATSC 3.0 specifies the use of the following standards for the encoding of video, audio, subtitles & caption information and signaling data:

All this data is then handed over to the transport and network layers.

We will use the ATLAS NG (the NextGen TV ATSC 3.0 analyzer from PROMAX) to display the screen captures for the different layers in ATSC 3.0. In the screen below, we are highlighting the Video and Audio codecs and subtitle details of the service currently selected in the ATLAS NG analyzer. 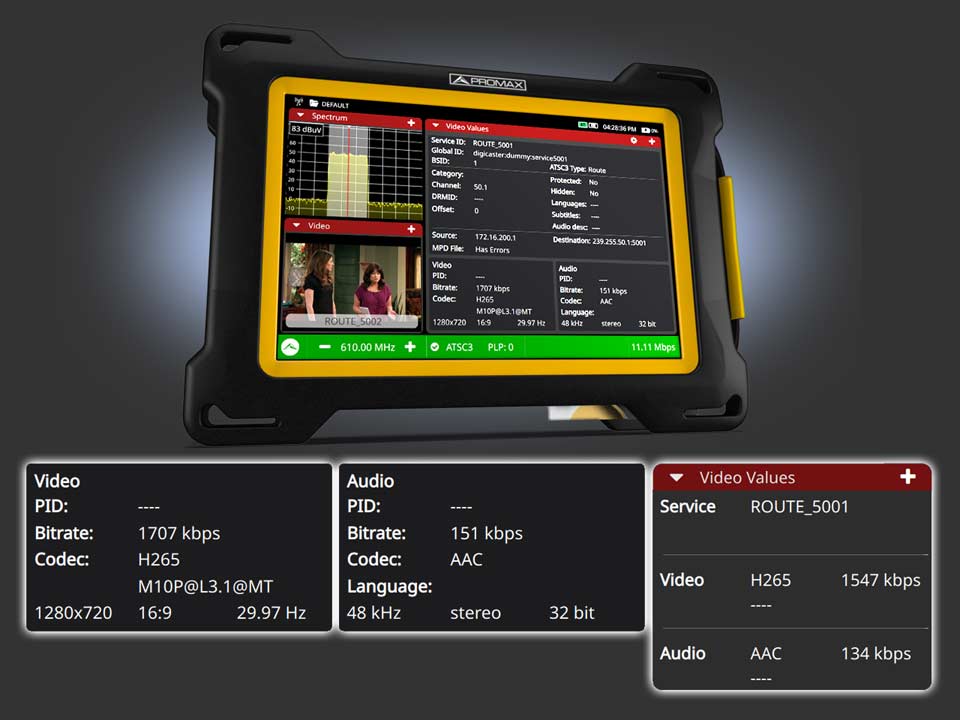 Here, the ROUTE-DASH, MMTP packets and Signaling data are encapsulated into UDP/IP and TCP/IP packets for their transport.

ATSC 3.0 protocols involved in the Transport and Network OSI layers (click to enlarge)

Service delivery over broadband will make use of DASH packets over HTTP/TCP/IP protocols.

The objective of this layer is to take in all these different packets from the network layer and channel them under one single common packet format called ALP (ATSC Link Layer Protocol) for its delivery down to the physical layer in the transmitting end and back to the network layer at the receiving end.

ATSC 3.0 data link layer from the transmitter and receiver perspective (click to enlarge)

These ALP packets must be fitted for their physical transmission in specific PLP (Physical Layer Pipes). This is done by two intermediate protocols: the ALPTP (ALP Transport Protocol) and the STLTP (Studio-to-Transmitter Link Transport Protocol). With that aim in mind, they are encapsulated in BBP (Base Band Packets). The System Manager defines the number and configuration (modulation and coding parameters) of each PLP, and the Scheduler at the broadcast gateway builds the BBP that will be forwarded to each PLP. The usage of different PLP will open the possibility to assign distinct tradeoffs between bitrate capacity and robustness to different portions of BW within the same transmission channel.

These PLP are then hauled over to the transmitter via IP Multicast streams in an ordered manner. Each broadcast stream, in the physical layer (we will see that in a moment), is transmitted in a 6 MHz bandwidth carrier, where each PLP is directly linked to a portion of that bandwidth.

ATLAS NG analyzer lets you select a PLP after demodulating the ATSC 3.0 signal and also to display the details for every PLP embedded in the ATSC 3.0 carrier

There is one more system that is important at this point: the Preamble Generator. It takes care of generating the data that will allow ATSC 3.0 receivers to tune themselves to the modulation parameters (input formatting, code modulation, framing structure, etc.) used for transmission.

ATSC 3.0 signal structure including all signaling data (click to enlarge)

The signaling data mentioned earlier is transmitted in the Preamble as well as in the form of Bootstrap signals. The latter is a robust signal that allows the receiver to estimate the RF channel, discover and decode the received signal, put together a service list, and convey Emergency Alert System (EAS) alerts, but its most imperative function is to allow for the receiver to lock to the received ATSC 3.0 signal.

At the physical layer the 6 MHz carrier is split into thousands of non-interfering subcarriers by using COFDM (Coded Orthogonal Frequency Division Multiplex), in the very same way that previous standards did, such as DVB-T/T2.

A comprehensive diagram of the processing blocks involved in this layer is presented below:

Data from each PLP is fed into a separate BICM (Bit-Interleaved Coded Modulation) path, where FEC is added accordingly. The BIL (Bit Interleaver) block takes a FEC Frame and adds further processing to provide degree of resilience against interfering noise bursts. Then these bits are mapped onto OFDM symbols and arranged in separate cells for each PLP.

LDM makes it possible to transmit the same data content using two levels of robustness by layering an enhanced RF layer over a core layer which is more robust.  Whenever the receiver is faced with insufficient reception quality, it can roll back to its more robust core layer.

OFDM symbols from the Mapper are fed into the time and frequency interleaving blocks for additional signal protection. This is finally followed by scattered, continual, edge and preamble pilot insertion (for channel and noise estimation, synchronization, etc.) and then conversion to a time domain OFDM symbol via an Inverse FFT (IFFT) (Inverse Fast Fourier Transform), PAPR (Peak-to-Average Power Ratio) reduction for power efficiency and GI (Guard Interval) insertion to add protection against echoes.

The constellation diagram shows us the reception quality of the OFDM symbols. It is possible to ZOOM IN on one of the quadrants.

ATSC 3.0 is a very powerful and versatile broadcast standard. Just like DVB-T2 learning all its capabilities, technicalities and options requires an in-depth analysis of the standard. However likely in practice everything boils down to a few key concepts.

When deploying ATSC 3.0 networks it is important to use adequate test equipment. ATLaS NG is a NextGen TV analyzer that makes it easy for broadcast engineers to deploy ATSC 3.0 networks by performing all relevant measurements automatically, focusing on reception quality and displaying the information in a comprehensive way.

ATLAS NG: The ATSC 3.0 NextGen TV signal analyzer
What is ATSC 3.0 and what are its innovations?
ATSC 3.0 technical overview
CONTACT