How to deploy WiFi networks and solve WiFi problems

There is nowadays a WiFi Access Point in almost every home supporting a wide range of applications going from general internet browsing to streaming of video services, not quite the same by the way, and suffering from many different sources of interference. Not only your neighbours have WiFi but you may have other Access Points in the house or outside as well.

Many home devices use WiFi to connect to the internet. A Smart TV would be a good example of it but there are many new satellite or cable TV set top boxes which include a WiFi Access Point to stream video to mobile devices such as smart phones or tablets. So you can easily have several Access Points at home.

These types of Access Points used at home or at the office are normally called “low density” because they support a low number of simultaneous connections, ten or twenty at the most. They normally have a single radio transceiver and they can be configured to work in a specific WiFi channel, to operate under a given “name” and they normally have different security options and features.

There are other types of Access Points used in hotels, convention centres or for big gatherings like football stadiums that are referred to as “high density”, supporting thousands of simultaneous connections. They normally include multiple radio transceivers and allow additional configuration features such as output power adjustment which turns out to be important when fine tuning WiFi networks for instance.

Video is a very demanding service for an IP network let alone a WiFi Access Point. Video streaming over WiFi will be at the centre of a future release.

Pros and cons of your smartphone WiFi analyzer

It is not unusual to face problems with WiFi and they are not very easy to understand and fix. There is a large variety of so called “WiFi analyzer” applications available for mobile phones, tablets and PC computers, including our own, many of them free or supported by advertisement.

Although they are great at exploiting the capabilities of the mobile phone or PC WiFi they can not be labelled as real WiFi analyzers first because they do not have a real spectrum analyzer to cover the physical layer and second because they see the WiFi environment through the ‘eyes’ of the mobile device WiFi radio transceiver. Spectrum analyzer will be necessary to see non WiFi interference for example as explained later on.

The RANGERNeo field strength meters offer a new set of tools to help wrestling with the WiFi and win. This text covers a first release of them.

RANGERNeo is a new breed of multifunction TV, Satellite and WIFI analysers, intended to help technicians not only to deal with their classic so called linear TV (satellite, cable TV, broadcast) signal distribution problems but also to deal with the many challenges brought about by the wireless world and the new video delivery platforms.

WiFi uses ISM (Industrial Scientific Medical) frequency bands. There is no license required to operate in those bands and so they are used by many other devices like Bluetooth headsets, microwave ovens, Sulfur lamps (!), wireless CCTV cameras, cordless phones, etc.

For long time WiFi systems have used the 2.4 GHz band almost exclusively which is by far the most popular ISM band. It is now very densely populated even saturated in some places and therefore some new systems use the 5 GHz band. Not all WiFi devices (phones, tablets, laptops) are dual band (compatible with 2.4 and 5 GHz) so this is an important decision to make if you are setting up a new Access Point.

The 2.4 GHz band is comprised of 14 x 5 MHz channels (1-14) but not all countries use them all. Channel 14 is not used in Europe for example. Typical WiFi signal bandwidth is 20 MHz and so if Access Points are set to adjacent channels they will be overlapping. The 5 GHz band includes more channels with bandwidths from 20 to 160 MHz. Not so universal in terms of channel allocation different rules apply depending on the country.

A quick search on the Internet will provide many details about the exact channel allocation and particularities in every country. The table below describes the main practical differences between the 2,4 and the 5 GHz bands:

A quick view of WiFi channels in your area

As we begin to work the spectrum analyzer function will provide a very good overview of the WiFi situation in the area we are exploring. It will also allow us to identify our Access Points as the signal strength will grow when we get closer to them. We can also identify them by name (SSID or Service Set IDentifier) if we know it of course. 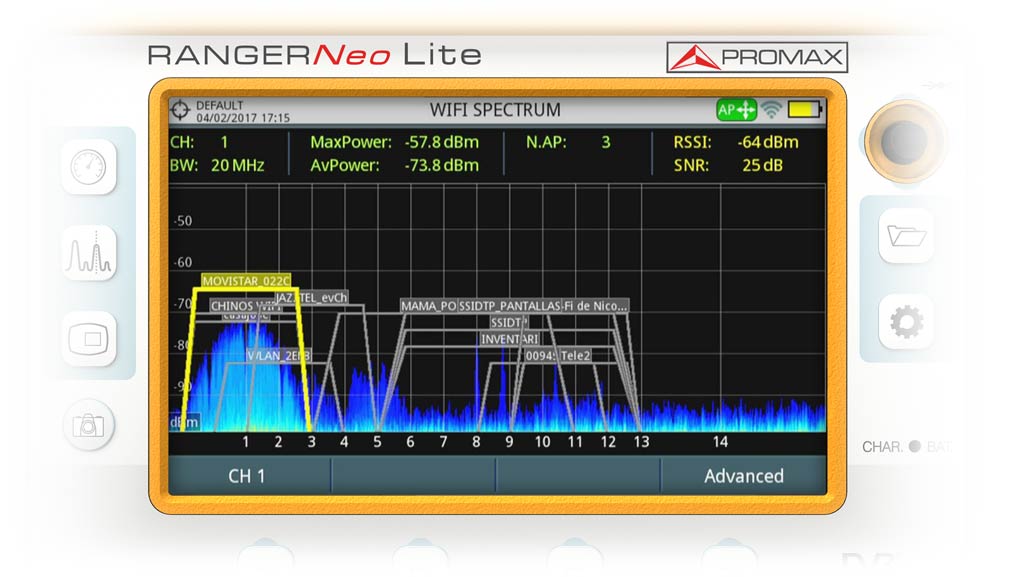 WiFi channels in the area.

Several conclusions can be drawn from the picture above already. Several Access Points can be operating on adjacent channels or even use the same channel. In both cases there will be crossed interference among them but the modulation schemes and protocols used in WiFi allow communications to happen in these conditions. However communication quality will deteriorate as several Access Points use the same channel or if they overlap with neighbours or if they have a high work load.

Because the ISM band is free you can only control what your Access Points will do and so installing and setting up WiFi systems ends up being a balancing act between doing the right thing yourself and understanding your surroundings.

SNR has a direct impact on WiFi communication data rates. The higher the SNR the higher the data rates possible. So it is recommendable to observe SNR for your range boundary investigations. There are no universal figures however. Remember that our Access Points are sharing the bandwidth with others we can not control, also not all WiFi devices have the same sensitivity but as a rule of thumb SNR in the range of 25-30 should mark your Access Point coverage.

Both RSSI and SNR are shown top right on the RANGERNeo’s spectrum analyzer screen.

In-house measurements. 1 meter, 10 meters and 14 meters from the WiFi router.

In the ideal world where nothing else is using our bandwidth it would make a lot of sense to avoid creating our own interference. This can easily happen if we operate more than one Access Point and we do not properly organise the channels they use.

Most WiFi routers will come preconfigured for automatic channel selection. In this mode the Access Point will choose a channel based on whatever reasons are embedded in its software. This is not always a good choice. Manual channel selection will let you know where your Access Point is now and will be for it will stay there.

There are a limited number of non overlapping channels you can choose depending on your bandwidth settings. Note that a typical 20 MHz bandwidth Access Point will occupy four channels. The table below describes the situation:

The first option describes what we believe is the most typical scenario, channels 1, 6 and 11 (14 not used in EU) being not overlapping. Say we use two WiFi routers for example. We could then select channels 1 and 6, 1 and 11 or 6 and 11.

But we are not by ourselves and there will be plenty of other WiFi and non-WiFi devices using the same frequency band starting with your neighbour’s Access Points. It will be very interesting to scout the band to identify what channels support (1) a lower volume of Access Points and (2) less traffic. Two different things, the number of stations using a channel and the volume of traffic they handle.

The number of Access Points operating in a channel can be read directly from the N.AP on the screen. The lower this number the better of course. 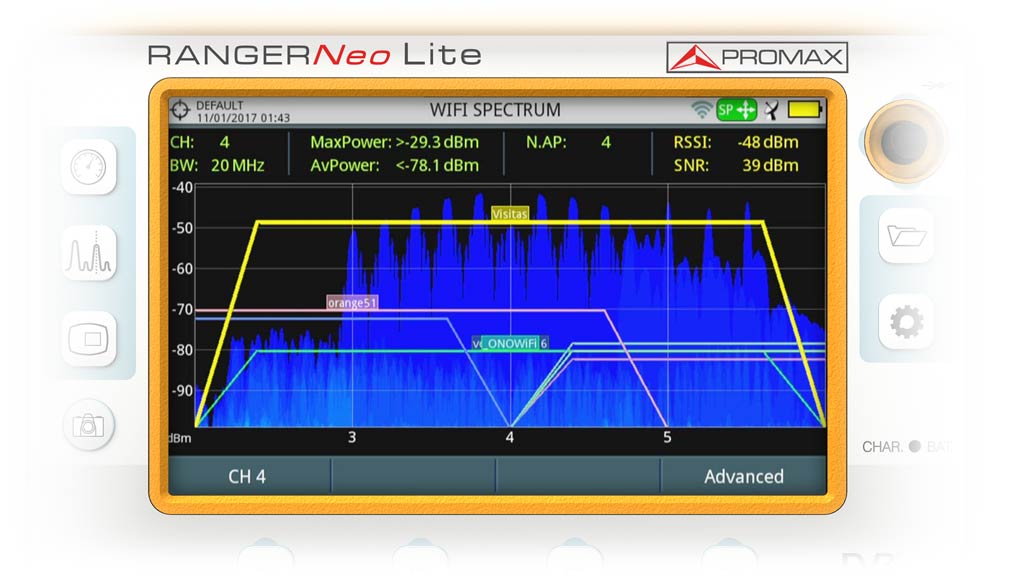 This can be interpreted from the MaxPower and AvPower readings but in this case the “temperature” graphic of the RANGERNeo’s spectrum analyzer becomes handy as well, the brighter the graphic the higher the channel usage, so you can have the same information at a glance. 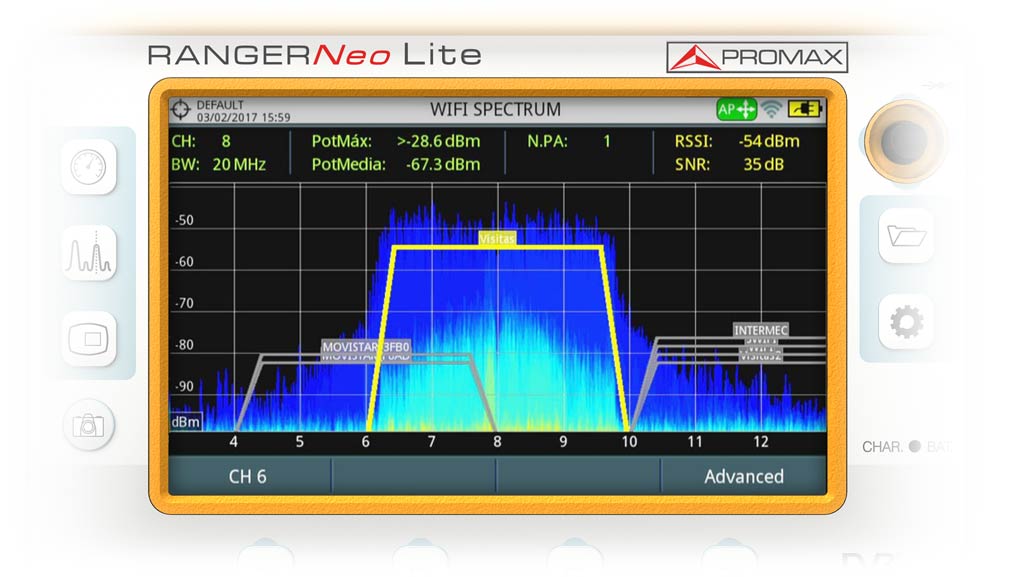 Any equipment using the ISM band can create interference, raise the background noise levels reducing the SNR and having an impact on the operation of your Access Points. Bluetooth peripherals, cordless phones or even baby monitors and microwave ovens operate in the same frequency range. The pictures below describe two examples of such interference.

Once again the spectrum analyser function is vital to detect, identify and try to mitigate those interference sources. 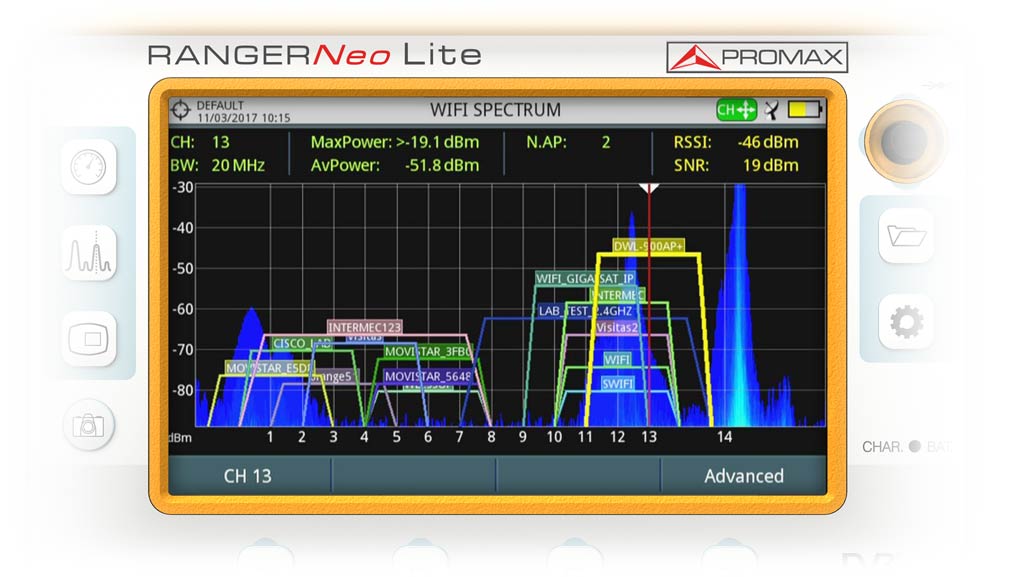 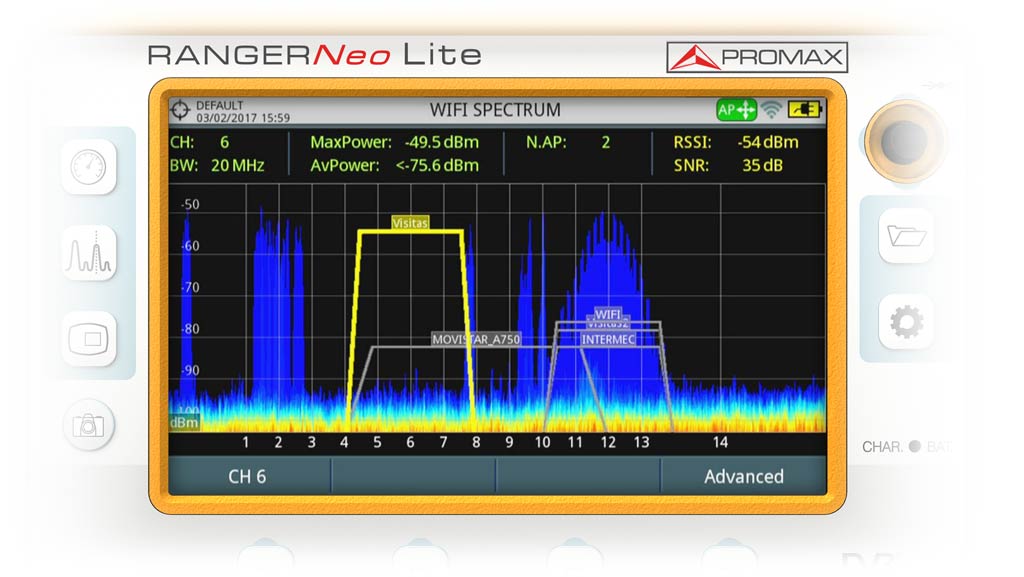 Bluetooth devices use narrow band frequency hoping modulations and tend to create interference in the whole band. Although Bluetooth uses low power and has a low range many devices operating simultaneously in the same area can have an impact on your WiFi reception.