What is shoulder attenuation and how to measure it

Broadcast signals such as DVB-T, DVB-T2, ISDB-T or ATSC are constructed to follow strict RF requirements mostly aimed to ensure they occupy the bandwidth they have been assigned and they do not interfere with any other adjacent channels. In particular the shape of the signal spectrum must be within the limits of certain given masks specified in the different corresponding standards, i.e. ETR290 recommendations for DVB-T. The specific masks depend on the type of signal and standard.

Due mainly to nonlinearities in the power amplifiers the output RF signal contains unwanted band limit and out of band components, the shape of which has given rise to the term “shoulder”, that tend to compromise the compliance with the mask limits.

The left picture depicts the spectrum of an ideal digital channel. The right image shows shoulders result of distortion mainly in the power amplifier.

How to measure shoulder attenuation

Shoulder attenuation should be measured at the output of the power amplifier right before sending the signal to the antennae through the net of passive devices. Because of the power level typically available at that point it is mandatory to use external power attenuators so that the level can be adapted to the maximum accepted by the analyser.

The shoulder attenuation measurement must be performed following the procedure well described in the norms governing the corresponding standards, DVB-T, ATSC, etc... which are far from being straight forward and require a high performance spectrum analyser and proper operator skills. Maximum peak values within the channel depending on signal type and resolution filter used, channel limits, several values at different frequency offsets and different calculations, all these need to be determined to do this measurement.

The RANGERNeo 2 and RANGERNeo 3 field strength meters for DVB-T, DVB-T2 and DVB-C2 as well as their corresponding ATSC and ISDB-T variants are now able to perform this measurement automatically and display it along with other relevant data such as pilot carrier amplitude, MER, VBER, etc. 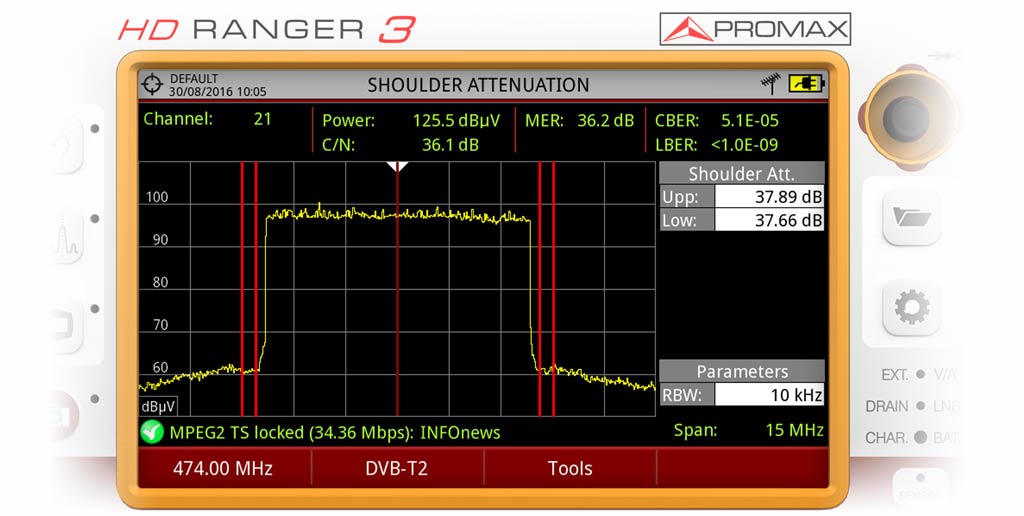 This measurement is important but it is time consuming if performed with conventional spectrum analysers. But it can be done swifty with PROMAX RANGERNeo TV analysers even in the field thanks to the analyser’s rugged design and 2 kgrs weight. And that’s including transport stream analysis and recording, IP interface and more.