Measuring the electric field strength with the RANGERNeo analyser

The tool "Field Strength Meter" or “FSM” is available for all the TV analysers in the RANGER Neo family since the 15.4 release.

This tool measures the electric field strength of signals in the radio spectrum bands supported by the RANGER Neo. Not to be confused with the signal level or the signal power. It is mainly used to check the coverage of a radio antenna as it is an independent parameter of the receiver antenna.

To use the "FSM" tool we need, in addition of the RANGER Neo field strength meter, a calibrated antenna and its characteristic parameters.

Find out the electric field strength anywhere
by using an RANGER Neo meter and a calibrated antenna.

What is the electric field strength?

We are surrounded by electromagnetic waves: visible light, microwaves, infrared... are part of the electromagnetic spectrum. The difference between them is their frequency and energy.

In telecommunications both broadcasting companies and government agencies which are in charge of radio electric spectrum, need to know at certain times what is the electric field strength to check the coverage of a TV broadcasting antenna or other type of broadcasting (Wi-Fi, telephony, Tetra, private communications).

In laboratories it can also be used to verify compliance with regulations such as electromagnetic compatibility (EMC), which defines the amount of radiation that electronic equipment can emit and receive.

Measuring the Field Strength with the RANGER Neo

The Field Strength tool of the RANGER Neo measures the electric field strength in units of dBμV/m  (decibels relative to 1 μV/m).

First, the receiving antenna must be connected to the field meter. The antenna receives the electric field signal and the signal becomes a voltage value on the load impedance. The relationship between these two parameters, electric field and voltage generated it is called antenna factor or k factor.

The k factor, the measurement frequency and the type of detection (PEAK or RMS) and the losses for the cable must be set on the meter to get an accurate measurement. There is also the possibility of importing the characteristics of each antenna automatically from an Excel file.

Next it is to select the channel or frequency to measure and enable the Field Strength tool. Measurements can be saved on the equipment and then downloaded for further analysis. 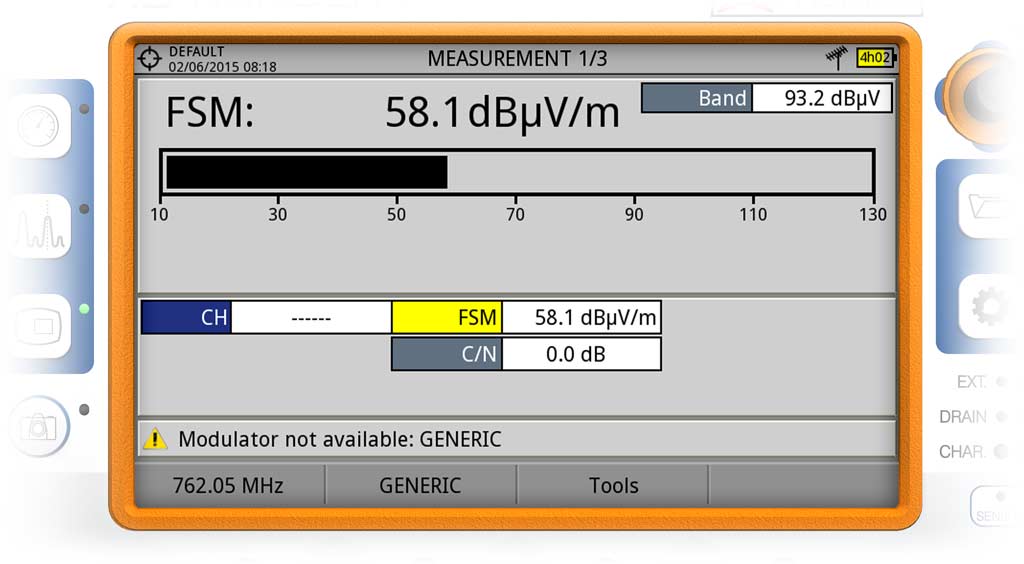 In the Field Strength mode, the equipment does not demodulate neither detects the type of modulation. Only it measures LEVEL with the 100 kHz filter and the selected detector and then it applies corrections (impedance, antenna and cable). The settings screen displays a small calculator at the bottom that shows the contribution of each correction value in the final result.

Avoiding interferences due to satellite installations

Most installers work with great professionalism, in order to reach the higher standards in quantity and quality of the received signal, so the best reception is achieved. However, very few know that a satellite installation bad performed can generate interferences in telephone operators which result in cuts during calls.

The same happens when an installation gets older or begins to radiate because of a LNB unstable. This phenomenon generates a large number of corrective actions by government inspectors. Installers had no way of knowing the radiation level of its satellite installations.

Current standards like the EN-50083-8 makes very clear the acceptable levels of radiation at installations, but installers did not have proper instruments to check it. Now, with the new Field Strength Meter tool in the RANGER Neo, any installer can evaluate his work to avoid complaints by operators due to LNB damaged or improperly installed.