The echoes analyser function of the RANGERNeo field strength meter shows the response in time of a digital terrestrial channel and therefore it can detect echoes that can occur due to the simultaneous reception of the same signal from several transmitters with different delays and amplitudes.

Technical article about the problem of the echoes in the transmission of digital terrestrial television signals.

Another cause that may cause echoes is reflection of the signal on large objects, as buildings or mountains. This may be the explanation that having a good C/N and a good signal, the BER does not reach the minimum value.

A typical scenario of a digital terrestrial signal reception with echoes

With the Echoes function is possible to know the distance from where the equipment is to the transmitter or the object that caused the echo. Thus, the installer can minimise the effect that the echo may cause on the installation, reorienting the antenna and reducing the effect of received echoes.

In the RANGERNeo field strength meter, dynamic echoes analyser function is available for all DVB-T, DVB-T2 and DVB-C2 digital signals. 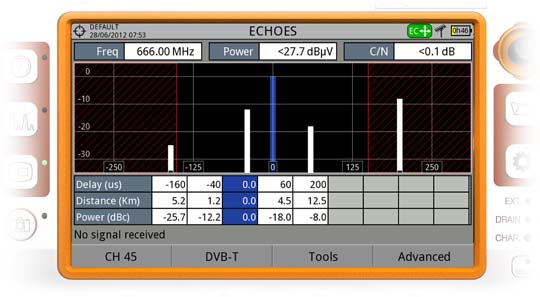 Screen of the field strength meter model RANGERNeo
displaying a graphical representation of the echoes
Share :