With the last software version, SATHUNTER+ and SATHUNTER are now easier to use

You can download right now the new software version for free, which has numerous improvements for the Satellite Hunter.

Thanks to the new navigation system now is faster to scroll between the detection points (TP) that can be pre-configured by the user.

With the new function SPECTRUM is easier to identify a satellite from the FI spectrum at the whole band. You can also change directly polarity and LNB band.

(*) The SPECTRUM function is only available for the SATHUNTER+.

Easier to orientate the satellite dish

With the new measurement process for the power input, it is even easier to point the satellite dish. Even with extremely weak signals, the bar graph shows activity and the beeper will begin to be heard. You should just move the dish gently looking for the maximum variation at the bar graph. 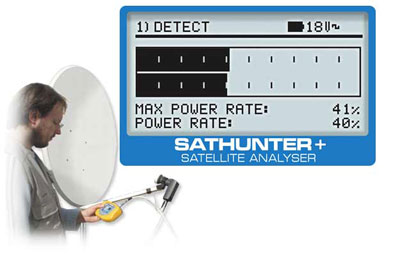 Now you can pre-configure 50 detection points. This allows the equipment to store up to 50 combinations of frequencies and polarizations, so you can identify a greater number of satellites and transponders.

Now it is also available the new version of software for the terrestrial antenna pointer model TVHUNTER. This free version includes the new navigation system, which allows greater flexibility to explore the detection points, and the possibility of using up to 50 detection points.