ITELAZPI, the company that broadcast radio and televisión in Euskadi, has selected PROMAX equipment for the coverage of DTT in rural areas.

The penetration of DTT in Spain has to reach 98% of the population for the public televisión and 96% for the prívate broadcasters. The use of the digital television headend model Digital To TV has allowed ITELAZPI to expand the coverage beyond the limits requested by law. With this solution, they warrant the citizents in this region, even those living in the most remote towns, to get DTT with the highest quality standards. This is a remarkable service precisely in one of the most complex orographic areas in Spain.

In this case, the Digital To TV television headend is used as a regenerative unit, for the coverage of small communities. Traditionally, to cover this type of sites, it was common to use repeaters. The use of the Digital To TV television headend have some very remarkable advantatges. On the one side, the equipment is able to recover the original quality of the signal. Even when the reception is very poor, it modulates it again so that it is completely regenerated to the standards of a main transmitter. On the other side, it  allows to select an output channel different to the input channel, so avoiding the need to use echos canceller.

ITELAZPI wanted to re-use the existing analogue infrastructure for the distribution of the new digital multiplexes. Therefore, the new digital channels are broadcasted in the area using the same frequencies left by the analogue ones. Despite being in an SFN, given they are terminal units and isolated from the rest of the network, the use of other channels becomes a minor compromise.

In this article we describe the topology of the installation in one of the regenerative centers in the Little town of Azazeta (Alava).

Azazeta is surrended by hills and the re-transmitter is located in the mist of the village, in a point with reception from the nearby transmitter of Sta Cruz de Campezo, located 13 km away.

The existing infrastructure included the tower, the antennas and all the rest of structure for the transmission of 6 analogue channels, that is now being re-used to broadcast the 6 digital multiplexes.

Maintaining the frequencies of the output channels allows to keep up most of the multiplexers and filters. 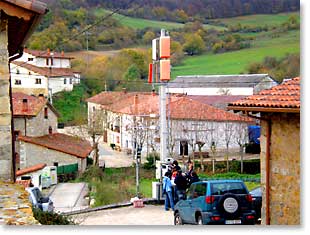 This is a small town scattered around an area of some
100 hectares, so an amplification of 250 mW by cannel
will be enough to cover the whole population.

The input block has the following configuration: 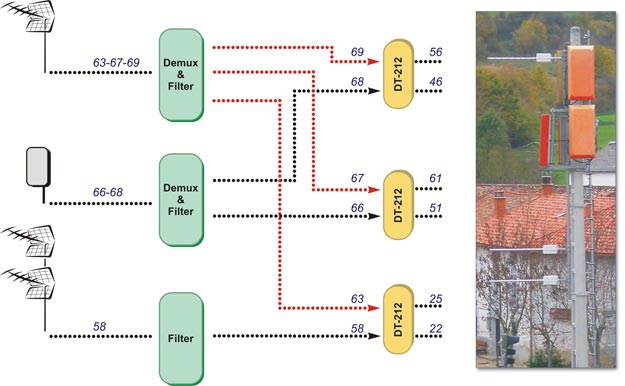 The regeneration modules DT-212 offers a total flexibility, allowing to move any input channel to any output frequency.

The output block is designed for  a power of  1 W per channel after the signals are spread among the 2 antennas:

In this case, due to the signal was exceeding the needs for the target coverage, it was preferred to use only one amplifier for the two combined channels at the output of the DT-212 regeneration modules, so that the solution fits in only one cabinet. The output was adjusted at 250 mW or 131 dBuV per channel with a MER higher tan 34dB. This power is enough to cover all the town and simultaneously avoid the saturation of the receivers.

Field measurements performed by the field strength meter model TV EXPLORER II+ confirm a value of 94 dBuV and a MER level greater than 34dB across the population. Using the TV EXPLORER II+ and the AE-967 Spectrum Analyser all measures required during installation are taken.
Share :