PROMAX, a reference in all sectors

PROMAX has developed a significant portfolio of products, thanks to a powerful and constant effort on R & D. The strategy to remain at the technological forefront and a relentless commitment to quality has allowed deploying many of our equipment and technology solutions in areas that we never would have imagined. As soon as the use of technologies related to digital television and high definition spread, it will be more than likely to find us in other new and unknow areas.

For example, if during your holidays you have enjoyed a cruise, do not be surprised that PROMAX was accompanying you. One of the sectors that most demand our DTTV headends is the cruise industry, where the audiovisual entertainment on board is vital and omnipresent. From the casino, theaters, lounges, bars, restaurants, gyms to the indoor areas, and of course the cabins, all them have facilities for the audio-visual entertainment.

In this type of facility, the DTTV headend distributes all the television signals on board in DTT format, regardless of its origin. Broadcast signals usually come from recorded contents, live events, cameras capturing images during navigation and stabilized antennas of satellite TV reception.

The DTTV headend appears like the only solution to spread over 200 different programs to any TV, with a minimum investment. At any time it can adapt the satellite channels to the profile and nationality of the cruise passengers.

One of the cruisers equipped with the DTTV headend is the ship “Mein Schiff” of the Germanic shipping TUI Cruises, which belongs to two giants of tourism: the tourism group TUI AG and the Royal Caribbean Cruises.

Although cruise ships often use products and technology similar to that used on "land", the level of demand is very high and not all solutions are appropriate. Very few types of equipment can cope, like the DTTV headend, to extremes temperatures and humidity conditions, strong vibrations, violent shocks by waves, and adapting to space and power consumption constraints. In addition, the limitation of technical staff dedicated to technical tasks, due to the space required for the crew, requires equipment working autonomously, without maintenance and logically without breaking down.

If during your holidays you have stayed in a hotel, and your room received the television offer perfectly, surely the TV signal came from PROMAX equipment. More and more hotels are facing image quality problems, which affects the expectations of customers negatively. For this reason they chose the DTTV headend to offer all TV programs in DTT format, without modifying the installation or additional reforms.

In certain situations, when the hotel has a big number of analogue television sets, and is not intended to replace them, it is usual to rely on the CROSS-GATE headend as an alternative solution to adapt digital signals (terrestrial and satellite) to the analogue format.

Besides tourism, PROMAX equipments are also gaining prominance in sports. If you have assisted any match at the Spanish pitch of the RCD Espanyol football team, you have also been in contact with PROMAX technology.

In this installation the headend receives the audio and video signals in analogue format from the mobile units, which are responsible for collecting images of the match. The DT-504 module encodes the signals in MPEG-2 format and then it modulates them in DTT format to insert them into the stadium network.

You can also find us in the art world. The “Gran Teatro del Liceo” of Barcelona, considered one of the most prestigious opera houses worldwide, also relies on the PROMAX technology to equip an architectural landmark as unique as "El Liceu".

This time the DT-504 module, from the DTTV headend, receives analog audio and video signals from various cameras, arranged in different scenarios and multi-purpose rooms, and it distributes them in DTT format to all monitors spread around the building.

The DT-504 module has four MPEG-2 encoders for high performance, which keep pecualiarities and dynamics of sounds and image quality. The same module multiplexes the digital streams obtained and modulates them in DTT format. Then the resulting output is incorporated into the distribution network, so the developed activities can be watch and listen with the highest quality from any monitor in the building.

Due to the robustness of the DTT signal, it was not necessary to modify the wiring of the building, which is very important in this building due to its emblematic status that restricts any type of intervention. The entire existing distribution network was re-used, guarantying that all sockets receive the signal without any degradation.

In other areas, PROMAX has been selected as a suitable company to become a technological partner of the most advanced companies for the development and provision of technological solutions.

In all likelihood, the DTT signal received at your home comes from a transmitter station equipped with a PROMAX modulator. Currently over 50% of the Spanish population receives the DTT signal from a transmitter that incorporates a PROMAX modulator. Also government agencies, and even the own operators have trusted on PROMAX to be supplied with the equipment for monitoring radio spectrum.

If you are subscribed to a cable operator, maybe the signal that comes into your home also comes from PROMAX equipment.

Many operators, who have discovered the advantages of using DTT in its cable networks, have relied on our products, such as the Galician cable operator "R", which provides services in all areas of communication (telephone, internet, television...) through its own advanced telecommunications infrastructure. 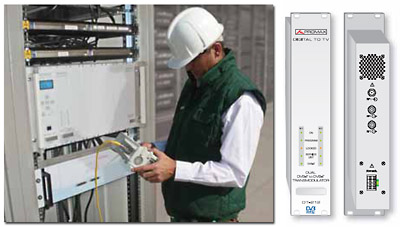 The solution provided, based on the DTTV headend, receives all the DTT off-the-air channels from a terrestrial antenna and through a set of DT-212 transmodulators extracts the transport streams from each channel to regenerate and re-modulate them in DTT format.

As a result a high-level quality signal is obtained, ready to insert into the cable network.

Obviously, the transmodulators can re-place a channel in a different frequency than the reception frequency. The regeneration of the signal ensures a high MER, which guarantees a broadcast quality at any point in the network.

Specific design characteristics such as the high MER or the proven reliability of our modulators, allow PROMAX equipment to prevail successfully in the field of the professional telecommunications. The quality standard in this field is very strict and requires the equipment kept operational 24 hours a day, each day of the year, with no possibility of service failures or degradation of the characteristics. Other qualities such as robustness, allow using PROMAX equipments without problem in stations located in adverse climatic zones. 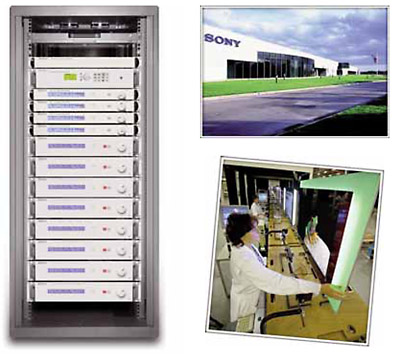 Another prominent field of action is in consumer electronics. If your TV is SONY, probably has been adjusted and proven by the PROMAX technology. Several SONY plants have trusted on our products to ensure that all manufactured units meet established quality parameters.

In their production lines they use video generators and centralized systems of DTT signal generation, which are designed and manufactured by PROMAX. In this sector, where the productive capacity of a plant may exceed the 15,000 televisions daily, the strict quality policies do not allow mistakes and productivity levels are always improving. Therefore it is vital to use equipments that apart from its high performance guarantee reliability, such as those developed by PROMAX.