The advance of digital television is unstoppable and so it should be. The variation in picture quality many viewers have endured is about to come to an end. Experience shows that even in the most expensive hotels and apartment blocks picture quality has been seen as absolutely dreadful! That is not to say well installed analogue signal receiving set up will be inferior to a television image derived from a digital television (DTT), the fact is digital quality is consistent.

One of the main advantages to digital over analogue is that stable picture images can only be decoded from a stable quality digital signal, that is to say if the signal quality is poor the viewer will suffer a blue screen or anoying picture break up. Which introduces another benefit, there is only one picture quality produced from digital television receivers and that is ‘good’. There are no longer the snowy pictures as with poor analogue reception, with digital you either get it or you don’t.

In an apartment block, hotel, conference centre or similar, the advantages of COFDM signal distribution can be of real value.

There are many developments in high definition (HD) broadcasting and are now available from DTT and satellite TV (DVB-S2) providers, this is a separate issue and one we will address elsewhere.

The purpose of these notes is to show ways where the viewer, installer and the owner of the premises can benefit from the new COFDM technology now developed by PROMAX. We suggest the days of trying to watch ‘absolutely dreadful’ television pictures are numbered!

Having satisfied that need broadcasters and digital television manufacturers then identified their need for an agile VHF / UHF COFDM test signal generator. This brought about the MO-170 Agile DVB-T Modulator, which serves the need for both COFDM multiplex test generator and as a high quality modulator. 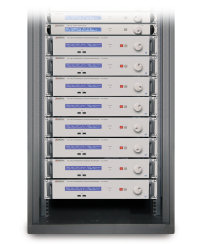 Manufacturers of iDTV sets can now create DTT signals of high quality anywhere
in the world.

By adding into the product range an audio and video encoder, the IC-065, we could then create a COFDM signal to mimic the DDT transmissions of BBC, NTL and other broadcasters.

These modulators are now to be found in many applications such as testing ‘Freeview’ boxes and iDTV (integrated Digital Television) sets where the addition of a calibrated noise source, controlled levels of error injection and controllable calibrated output level makes these ideal for Test Houses and Quality Assurance departments to ensure digital receiver quality and performance.

The MO-170 and IC-065 can also be found as the heart of digital signal distribution systems within many hotels, conference centres, cruise liners plus countless other applications.

With the unique knowledge and ability to produce COFDM equipment there appeared other spin off applications.

For instance where a hotel feels the need to offer many TV channels yet are unwilling to pay subscription charges to service providers, we have introduced the MO-162/163 series of QPSK (satellite TV signals) to COFDM transmodulators. The installer can cherry pick ‘free to air’ television programmes from an incoming satellite transponder and produce a COFDM DTT signal.

The system allows a minimum of four television programmes to be distributed with a broadcast quality or up to double depending on the original resolution of the satellite channels. The hotel may wish to have its own television channel to publicise a special service being offered to their clients.

The installer can if required add this signal to incoming ‘off air’ DDT signals just like any other signal. All the viewer requires is a “Freeview” box or iDTV set to enjoy high quality pictures where selection of the programme is via the standard remote control. This system dispenses with the need to distribute analogue television channels giving more spectrum space for other applications.

There are many situations where the customer demand programmes from several transponders or even different satellite television platforms. When the signals come from an encrypted source, you can use a satellite receiver with ASI output and a CAM interface to drive the MO-160 / MO-161 modulators. The signal can then be combined with channels from adjacent modules to produce la standard COFDM DTT plan of channels.

The built in CAM decodes the incoming satellite digital signal.

This signal like as with the MO-162 / MO-163 applications can then be distributed throughout the building to be received and decoded by a standard “Freeview” box or iDTV set. We think for the first time the installer can now at a reasonable cost, access encrypted QPSK signals, decode them and produce a COFDM DTT signal with all the benefits of a consistent picture quality and performance.

The successful implementation of these exciting opportunities and the exploitation of the benefits of DTT and DVB-S and S2 does depend on the skill of the installer. However, more important is his use and understanding of the right field strength meter, for unless he can measure accurately all the parameters of the digital signal he will most likely face a series of “blue screens or picture break up”.

The “TV Explorers” were launched and became an immediate success story. This was no lucky accident, for the design of this ground breaking field strength meter was developed in parallel with our modulators and our intimate knowledge of all things related to the latest COFDM, QAM and QPSK transmission technology.

As part of the Education Equipment product range PROMAX is now supplying Universal Digital TV Receiver Trainers, Model EU-850 and Flat Screen Television Trainer, Model ET-892. These packages include manuals both tutor and student plus all the software and hardware for them to really understand these new important technologies.

All these applications and equipment are helping the television manufacturing, broadcasting and installation industries to speed up the transition from analogue to digital television. We have faced with them many advanced technological challenges and for as much as we believe in the future, we feel confident we are offering equipment now that will stand the test of time.

The advance of digital technology is rapid and already we are all benefiting from the implementation of the technology in the field of television and COFDM signal distribution. The opportunities are here to stay.