High Definition Television is a new TV format that intends to display video information with higher resolution than conventional TV.

After a long period of time with confusing technical information about HDTV, the industry has now agreed on the exact meaning of HDTV.

TV sets, based on CRT, TFT or plasma technologies, are compatible with HDTV and can consequently carry the label “HD READY” only if they are compliant with the certain technical requirements (see below).

HDTV is broadcast using digital television techniques only. The HDTV video signal must be processed to prepare it for transmission.

Nowadays HDTV programmes can be received in the UK via satellite only. Astra 19E, Eutelsat 13E or Astra 23E offer a selection of transponders with HDTV content. With the World cup event coming up shortly BBC has announced that a DTT HDTV trial, limited to a few hundred households in London which have yet to be chosen, will take place. But other than this satellite is the only option.

The PRODIG-5 TV Explorer is compatible with DVB-S so it can make measurements on HDTV channels using this modulation scheme.

This is the case of TXD's 116 and 2 and is independent of whether the programmes are compressed in MPEG-2 or MPEG-4. The service list will indicates the presence of HDTV services.Currently, power and C/N measurements can be carried out on TXD's using DVB-S2. No digital measurements such as MER, CBER, VBER can be made at present. However, because of the nature of satellite transmission, measurements taken at neighbouring channels can also be representative. 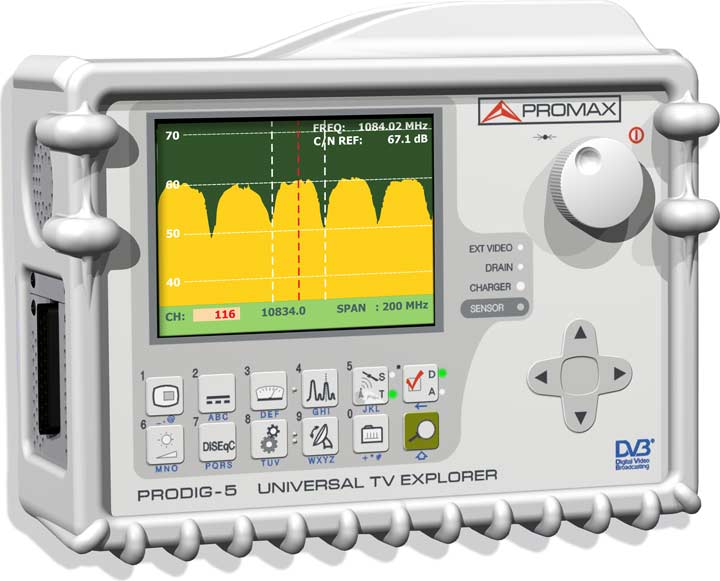 Spectrum for one ASTRA’s HDTV channels

Following is a list of some satellite TXD's currently using DVB-S: