The IF TEST or also called ATTENUATION TEST function allows to evaluate a building's IRS/SMATV cabling system before the antennas and head-end equipment are operative. For this application PROMAX has specially designed RP-050 and RP-080 signal generators. 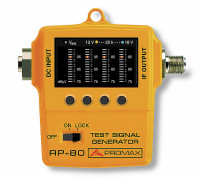 The RP-080 is handy, versatile and easy to use. The RP-080 needs to be used together with PROMAX TV level meters with satellite and terrestrial band coverage such as PRODIG-5 Universal TV Explorer, PROLINK-4/4C Premium, PROLINK-3/3C Premium or MC-577.

From the technical point of view this small device includes many useful features. It generates four pilot carriers, two in the terrestrial band (85 MHz and 750 MHz) and two in the satellite IF band (1000 MHz and 2150 MHz). The frequency accuracy of the pilot signals is as high as ± 50 kHz at levels ranging from 75 to 100 dBµV (selectable in 1 dB steps).

The picture shows the calibration screen in terrestrial mode. RP-080 generates two frequencies in this band, 85 MHz and 750 MHz and the TV Explorer will automatically detect them and show the values on the side bars. If we work with RP-050, which generates one single frequency in the terrestrial band, then the centre bar will be used.

Due to measurement resolution limitation users can always expect the cablibration to indicate some minute numerical loss.

UWe are now ready to start with the tests. RP-080 must be disconnected from the meter and connected to the system headend instead of the antennas. We will leave it there and go with the TV Explorer to the desired test outlet somewhere else in the building.

Once the meter is connected to the TV outlet and the LNB voltage is powering the RP-080 through the IRS/SMATV system, we can read the attenuation at the two reference frequencies at once